Betty Odine was more than just a collector. She was also a carver and a mentor. 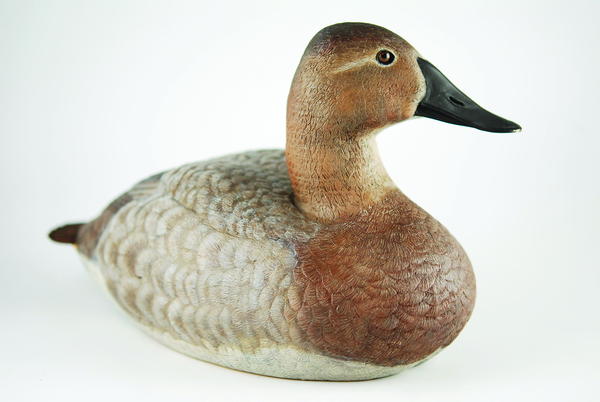 Canvasback Hen by Betty Odine (1978). Betty spent 10 years working on this, her only decorative life-size floating decoy. It won several awards at various competitions. She carved it from tupelo and painted it with oils.

These birds all belonged to one of the wildfowl carving world’s greatest supporters, Elizabeth “Betty” Odine, who died on May 19, 2012, at the age of 97. Many carvers remember her from the competitions she attended, where she often volunteered to sell raffle tickets. She sold them by the yard, measuring from her nose to the tip of her fingers. Because Betty was a large woman, you could be sure to get an extra two tickets in the yard she unrolled for you. She also bought hundreds of tickets herself, pointing out how important ticket sales were for supporting the show.

Betty was a passionate collector of wildfowl carvings and she loved every one that she purchased—and she cared about the people who carved them. She obtained many of the pieces in her collection through auctions at the competitions she attended. Her bidding style was unique. She would often pick the pieces she liked best before the auction began and would participate in the bidding, holding back as if to get the best deal. But if the bidding slowed and it looked as though the piece would go to another bidder, Betty would shout out a bid that was often hundreds of dollars higher, stunning the audience and ensuring her bid won.

This article was featured in Wildfowl Carving Magazine's Winter 2013 issue.