Home > Reference > Lord of the Sky

The golden eagle flies in a class by itself. 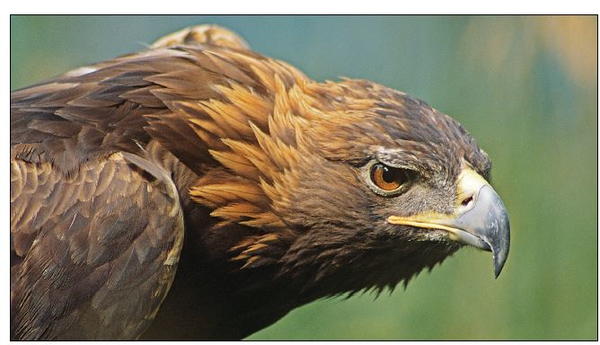 The golden, crescent-shaped feathers on the bird’s nape are a distinctive feature. The ridges over the eyes give the eagle a particularly menacing expression that adds to its fierce reputation.

Falconry, that ancient and honored hunting tradition in which raptors are the weapon of choice, is sometimes called "the Sport of Kings." Falconry had rigid rules. Some of them ensured the health and welfare of the bird, but the point of others was to show the status of the bird's handler. Only certain members of European social classes could fly particular birds. Kings could fly the mighty gyrfalcon, while the children, knaves, and servants had to make do with the tiny kestrel.

But there was one bird so large, so strong, and so difficult to train that not even kings dared use it, at least in the European world. That bird is the large, aggressive hunter known as the golden eagle (Aquila chrysaetos). People revered the golden eagle then, and they still do today. It is the national bird for five countries: Albania, Austria, Germany, Kazakhstan, and Mexico. The golden eagle also appears in the coat of arms of Egypt, Iraq, Palestine, and Romania.

This article is from the Fall 2010 issue. For more information on our issues, check out our issues page.