Home > Showcases > A Flock of Labradors

Making an extinct species come alive, in an old-fashioned way. 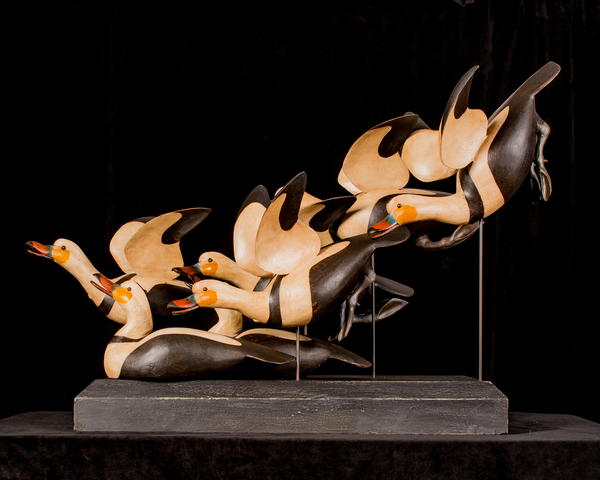 Bill Kennedy grew up hunting and making decoys on the Chesapeake Bay. He worked as a youngster with carvers from yesteryear in Havre de Grace and Charlestown, Maryland. He is a full-time carver and works in the traditional style of Maryland’s Eastern Shore and Upper Bay using the same hatchet, hand tools, and shaving horse techniques he learned as a boy. He now lives in Southlake, Texas, with his wife and two young children. You can find Bill’s work in several sporting art galleries in Texas and the East Coast.

Tucked away in a home in beautiful Bel Air Maryland is one of the most unique decoy collections in the country. The home belongs to Frank Jonczak, a well-known personality in the national decoy carving community.

Frank grew up in Maryland and was interested in decoys, so it is natural he would collect birds hewn by the Maryland carvers of old. In the last decade, however, he has divested himself of some of his Upper Bay birds to make room for a new his passion: Labrador ducks and Labrador duck decoys.

Labrador ducks went the way of the passenger pigeon sometime around 1875, when records say the last known specimen was taken and preserved. Only a handful of taxidermy birds now exist in museums around the country, but Labradors remain alive and well in Frank’s home. Numbering in the hundreds, Frank’s collection includes Labrador decoys by virtually every prominent carver in the country. A listing of the people who have carved Labradors for Frank would read like a virtual who’s who of the nation’s carving community.

A few years ago Frank and I talked at the Easton Waterfowl Festival in Maryland. He asked me to make him a pair of “dead hang” Labradors. Some months later, Frank asked me to add some passenger pigeons to the piece. When I delivered the finished work at the festival the next year, Frank asked me to make a pair of contemporary antique gunning Labradors. I worked up a pair of birds but felt unhappy with them. I told Frank I was cutting out a second pair. He asked me to finish the first pair as well. I wasn’t happy with the second pair either. I really wanted to make something different for such a diverse and large collection. I decided to put the original four gunning decoys on hold and began to design what I considered to be an “Audubonesque” piece. I have long loved the way John James Audubon positioned the waterfowl in his paintings. They look as if they are in impossible, awkward poses or are flying too sharply downward. His birds crowd each other in mid-flight, and sometimes look like they are about to collide.

A few years ago I made a swan in one of these Audubon flying positions and was pleased with the result. So the die was cast. I decided to make Frank a completely unexpected piece, one I hoped would be unlike anything in his massive collection. This was a bit risky, but I knew the design and preparation for such a piece would be energizing and exciting. I told my wife, also known as “higher headquarters,” what I had in mind. She was a bit worried about my working on a large, time-consuming piece that was completely unlike what Frank had requested. She asked, “What if he doesn’t like it?”

“Well, they could always be repainted as mallards,” I answered. Onward with the project.

I decided to put two birds on the water and four more flying in—or crashing in, per Audubon. The designs were quite simple, with stylized outstretched wings and—as Audubon might have painted it—the birds on the water looking upward. In the end I added a fifth flying bird to get the look I wanted, so the bird bringing up the rear joined the group when the project was nearly complete. The piece now had seven life size Labradors.


This article is found in Wildfowl Carving Magazine’s Summer 2015 issue!

And, in a web-only exclusive, see a gallery of more Labradors from Frank Jonczak's collection right here. 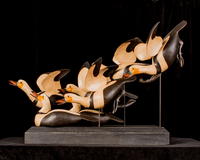