The Blackburnian warbler is tough to find but hard to miss. 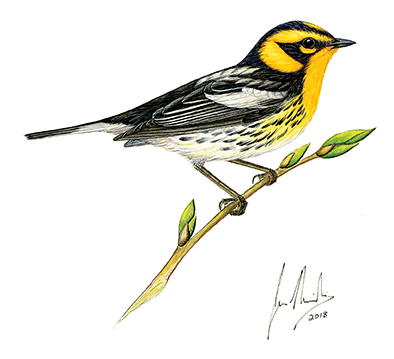 "Why does everyone like warblers so much anyway?” a new birder asked as she looked over the color plates in her crisp new field guide. She was matching the field marks in her book to the birds in the field. Bald eagles, Baltimore orioles, blue jays, goldfinches, and hummingbirds were easy—they either hovered around feeders or sat still long enough to target with binoculars.

Warblers are different. These bundles of feathered energy remain elusive as they flit through treetop leaves and needles, searching for moth and butterfly larvae. Focusing a set of binoculars on these birds is an exercise in frustration, but the thrill of the hunt is worth the effort. Warblers in their breeding plumage may lack a hummingbird’s iridescence, but, like fine gems, they glow with depths of color that cannot be captured in field guides, paintings, or photographs.

Some gems stand out even in a field of jewels, and the fiery-orange-throated Blackburnian warbler is one of the treasures in the warbler world. Brilliant orange fades to yellow on the belly and sides, but stays vibrant around the head as it layers with the black auriculars, eye stripe, and crown. There’s more orange in the median strip on top of the head. A pair of crisp white braces along the back rounds out the bird’s eye-catching beauty. Females are a little drabber but still beautiful.

Blackburnian warblers spend their winters in the neotropical forests of Central and South America. Early in the spring they speed across the Gulf of Mexico on the way to their breeding homes in the southern boreal forests of North America. Because Blackburnians are nighttime migrants, few people spot them during their flight time, even though millions of birds make the journey. This is the prime time for warbler hunters, as dozens and even hundreds of birds settle into small areas to ravenously feed and refuel after each night’s journey. It’s an opportunity for bird-watchers to get a rare and close-up look at this stunningly beautiful species.

By mid-May, males are singing thin, reedy songs from the treetops to declare their ownership of the land. They defend their territories from rivals with reckless dashes through branches and between trees. Males need to have a well-established territory before the females arrive a few days later.

Once paired, a couple begins looking for nest sites. Blackburnians prefer hemlocks with thin, heavily needled branches that project far from the trunk, but spruce and fir trees work as long as they are tall and dense. Nesting in precarious spots provides protection from tree climbers like raccoons, and the dense cover keeps the home hidden from flying hawks and crows. The birds anchor small twigs and strips of bark to the site with spider silk, weave tiny roots into the basket, and build a small cup of soft lichens and mosses in the center to hold and insulate the eggs.

The hen incubates for almost two weeks before the young birds hatch. As soon as their sepia-colored down dries, chicks transform from helpless lumps on the bottom of the nest to tiny monsters with ravenous maws demanding more and more food. The breeding season is short in the north, so the parents stuff a steady supply of fat- and protein-rich caterpillars down the gullets of their brood. High-energy food fuels rapid growth and it doesn’t take long before feathers begin poking through the natal down.

Feathers mean freedom of a sort, so once the nestlings become fledglings they take tentative steps away from the nest and into the branches of their tree. They stumble and explore their new world, picking at bits and specks, trying to learn the difference between bits of mold and tree debris and succulent insects.

Soon the young birds’ quiet exploring changes to persistent begging. They can never get enough to eat, and the parents work overtime to feed the wandering tribe. As more feathers fill in, the young birds start taking clumsy flights between branches and their begging turns to full-on harassment. They chase their parents in
an unrelenting demand for more and more food. The parents’ home life changes from hectic to overwhelming.

By mid-summer the harassment breaks the harried parents’ bond and they gradually move away from the territory they defended just a week or two earlier. The partnership may be over, but the juveniles aren’t ready to give up yet. A couple of the young follow each adult as they drift away from home, still hoping for free food from mom or dad. The adults tolerate this for a few days until they grow irritable and start chasing the younger birds away.

Now the adults need all of their energy to fuel their own changes as they molt from their dazzling summer plumage into the more subdued colors of the winter season. Brilliant orange fades to yellow, and deep black areas lighten to a more grayish hue infused with olive. In the wild it doesn’t pay to be showy when there is no reason for showing off.

By August the breeding season is over. Mixed flocks of warblers, young and old alike, along with occasional stragglers like chickadees and nuthatches, begin moving south. The stragglers drop off along the way but the warblers continue until they hit the Gulf Coast in mid-September. After a few days of fattening (and maybe some mental preparation), they are ready to make the big jump over the Gulf of Mexico to complete the final stage of their annual cycle.

So why does everyone like warblers so much? Maybe it’s the allure of their epic journeys or the mystery of their secret lives. Or maybe it’s because getting a good look at a warbler is like finding a nugget of gold in a stream of rocks—its hidden beauty made all the more precious by the thrill of the hunt. That’s why everyone likes warblers so much. 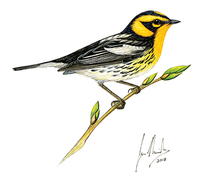 I think this cute little guys name should be Hanover. I know it's an odd name but if you say it while you are looking at him , the name will grow on ya. 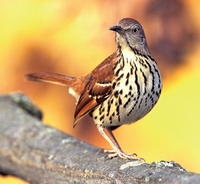 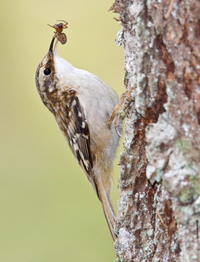