Home > Reference > Reflections on the Goldeneye

It makes you wonder. Why name a James Bond movie after a duck? 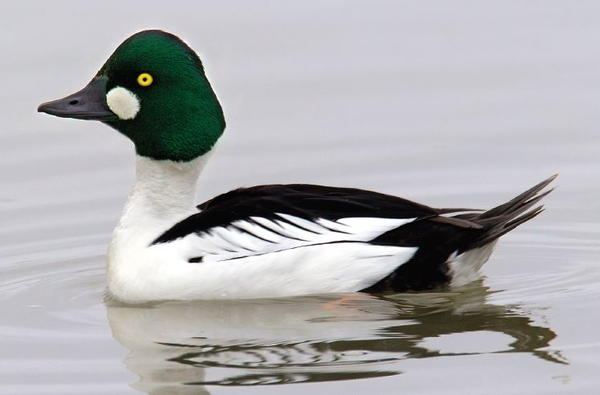 This photo of the common goldeneye is the perfect starting place for a high-head duck decoy.

People don’t often think of goldeneyes as seasonal indicators, as they do with the first robin of spring or the autumnal skeins of wild geese veeing south for the winter. But savvy nature watchers know that big changes are about to occur when the first goldeneyes show up to feed in the cold autumn lakes. Likewise, when the winter ice breaks and the goldeneyes dance as they swim, the first yellow days of spring are not far behind. The lifecycle of these cold-hardy ducks makes a grand circuit that keeps them in tune with the season’s cycles.

North America has two resident goldeneye species that cross the continent in their annual journeys. The common goldeneye travels from the northern boreal forests to the Atlantic coast and back each year. Its scientific name, Bucephala clangula, literally means “big head, whistle wings,” a reference to its rounded head and the way its wings whistle in flight. The Barrow’s goldeneye (Bucephala islandica, which translates as “big head Icelandic” because it was first discovered in Iceland) prefers the montane forests of northwestern North America, and it winters in the Pacific coastal areas. Barrow’s goldeneyes and common goldeneyes are similar in appearance, but can be distinguished by head shape. The common goldeneye has a sloped head and bill silhouette, whereas the Barrow’s goldeneye head protrudes forward, giving the bird a look reminiscent of a cartoon alien.

Adapted from Wings on the Water: The Great Galley of Geese, and Swans. © 2012 by Stackpole Books.