Home > Articles > An Art of Deception

How the author's decoys made the transition from water to gallery. 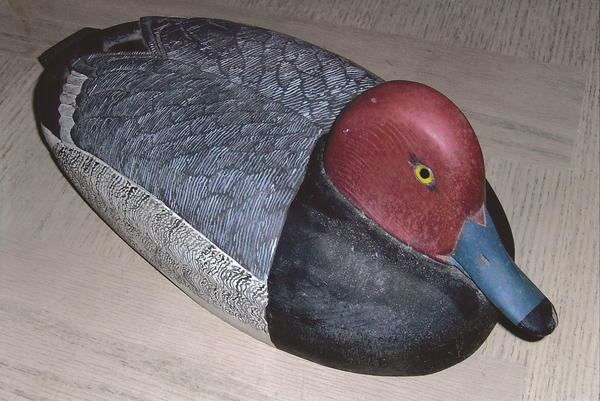 I began carving my own decoys shortly after moving to Idaho. Before that I had been stationed at Camp LeJeune, North Carolina, where I worked as a deputy game protector and got serious about waterfowl hunting. On the Eastern Flyway, redheads were in decline and protected. When I retired from the Marine Corps in 1974, I moved to Idaho and began hunting the Pacific Flyway. I soon discovered that redheads were abundant and legal here. I promptly ordered a dozen plastic redhead decoys from a hunting catalog.

What a disappointment. The decoys had plastic heads that might have passed for redheads clumsily attached atop mallard bodies. Adding the redheads to my plastic bluebill rig, I set them out for a shoot. I could hardly bear to look at them. I was repulsed by their vacuum formed anti-aesthetic. They all essentially looked alike, and you might as well throw them out when the paint wore off. I was completely disappointed by the lack of aesthetic appeal these mass-produced birds offered to what I thought of as a beautiful engagement with nature. I felt that the whole world was turning to plastic, and this was the last straw. I decided I would no longer insult any living ducks by showing them such trash.

I could have been satisfied with factory-made wood decoys, which I could repaint to my satisfaction. Another advantage of using wood decoys is that, in good windy weather, the plastic decoys tended to skitter around most unconvincingly. Being about the weight of a live bird, the wood decoys were more convincing as they rode a sea.

The cost of factory-made wood decoys, was, and still is, prohibitive; if I were to have any, I’d have to make them myself. It would take about three bucks worth of material to make a decoy, which at the time, was less than the cost of a plastic bird. I could afford that. I decided to carve my own. I had more than 25 years of woodworking experience by then and I thought if I could visualize a decoy, I could make one. I already had some experience with wood decoys in North Carolina and I knew what a decoy should look like sitting out on the water. So I started.


Read the rest of this article in Wildfowl Carving Magazine’s Summer 2014 issue!