Tom Christie encourages a herring gull to disrupt a pair of surf scoters in an ambitious rig arrangement. 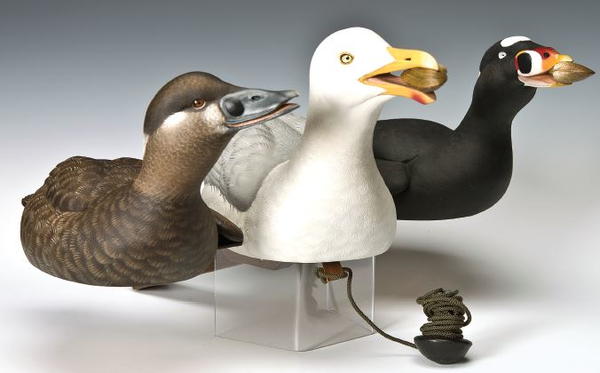 Tom Christie carved two scoters and a herring gull to construct his rig. The three birds form a single unit.

For my 2011 Ward World Championship rig, I wanted to do something new and challenging, so I began looking at species I had never tackled before. After considering a few concepts and touching base with some good friends, I decided on a pair of surf scoters with a herring gull. Carving a new species always gives me a greater appreciation for the diversity and beauty of waterfowl, and this project was no exception.

In my research, I ran across a few pictures of a herring gull bullying a pair of surf scoters and trying to steal their food. I liked the concept of using that interaction in a rig. Portraying this aggressive species of gull interrupting the scoters' evening dinner date became the creative spark that drove the project. The gulls' white and grays also contrasted nicely with the jet-black and dark-brown plumage of the surf scoters.

After working through some sketches, I began to think about tying the birds together in some way as a grouping. I can't claim that this is a new idea—others have done it in competition—but taking this approach gave me the freedom to consider a variety of positions for each of the three birds. Tying the three together meant that I didn't have to worry about how a high-head position or the long, narrow body of the gull might impact flotation. The rig would be very stable as a grouping as long as I could figure out how to get it to self right. I could also maintain the combative interaction I wanted to create among the three birds instead of having them float independently in a variety of orientations.

Carving the three as a grouping meant I had to consider some structural concerns in order to maintain strength throughout. I would also need a unique keel design to assure the rig would self right. I constructed a miniature version of the grouping to work through some of the challenges on a small scale before investing too much time in the full-sized rig.