This collection features the previous issues of Wildfowl Carving Magazine from the years 1985 to 1989. With four issues per year, the magazine offers an abundance of carving demonstrations, tips, step-by-step tutorials, reference articles, and more.

These years offer some of the most classic wildfowl: falcons, screech owls, ring-necked drakes, and waxwings—just to name a few. Plus, readers can learn more about the culture of wildfowl carving through articles on auctioneering such as "Crowell Pintail Sets Record at $319,000" in our Fall 1986 issue or soak in some historical facts about decoys in "A Little Decoy History" in Spring 1989.

The Legendary Canvasback (The United States’ most common duck) by G. Michael Haramis

Returning to the Delaware (An interview with Bob White, well-known carver and collector of the Delaware River Valley) by Gene and Linda Kangas

Beginner’s Notebook: Making Your Own Patterns (Learn how to make a composite drawing from several tracings) by Don McKinlay

Quillen or Smith? (A comparison between two Michigan carvers) by Joseph B. French

Weighting Decoys (How to weight your decoys to they float life-like on the water) by John A. Nelson

Beginner’s Notebook: Form and Feathers (A short demonstration focusing on the two most important aspects of a good carving) by Jon E. Jones

Birds in Flight: The Carvers’ Techniques (What contemporary carvers are doing to create action poses) by Roger Schroeder

A Bridge to Bay History (During the ’30s and ’40s, Jake Ferreira carved stylish decoys around the San Francisco area) by Michael R. Miller and Frederick W. Hanson

Expression Takes Flight: Works of Grainger McCoy (A visit with one of South Carolina’s most talented wildfowl artists) by Charles E. Warrington

A Little Decoy History: Conclusion (The final chapter looks at factors that influenced decoy design, the history of factories, and the carvers on the West Coast) by Gerald M. Rosenthal

Feeder Favorite (The cardinal is a familiar and welcome sight throughout the United States) by Dawn M. Coughlan

Wild About Birds (Floyd Scholz talks about his progress from teenage carver to respected artist), interview by Donna Sanders

A Little Decoy History (The first of a two-part series tracing the decoy’s origin) by Gerald M. Rosenthal

Masterwork Gallery: Northern Flights (A look at the work of Al Glassford, William Hazzard, and Robert Ptashnik) by William Koelpin

A Duck Comes Home (Through a series of coincidences, an amateur carver meets R. Madison Mitchell) by Mary Morris

Out of the Shadow (Setting the record straight on three oft-forgotten Illinois carvers) by Joseph B. French

Source: Carving Clubs (Information about membership and activities from clubs across the country)

Beginner’s Notebook: Feet and Legs (How to work around the problems of cast feet and legs) by Don McKinlay

The Blair “Mystery” (Sorting out the confusion that surrounds the decoys of John Blair) by Kenneth L. Gosner

Decoys “Down Under” (Wildfowl carving in the land of the freckled duck) by Dr. Hugh Lavery

Goose Appreciation (The price of a Schoenheider goose soars to $60,000) by Joseph B. French

Have You Tried a Clay Model? (The advantages of working in clay before you carve) by Charles Echols

Profile of a Classic Carver (A visit with Arnold Melbye, the dean of bird carving) by Roger Schroeder

Tracking the Elliston Decoy(A collector’s search for some of Illinois’ finest decoys) by Joseph B. French

Beginner’s Notebook: Burning Tools(Tips on how to use and care for burning tolls) by Don McKinlay

Quail: Habitat and Feet(Demonstration) by Roscoe A. Condon

Michigan’s Pioneer Collector (Phyllis Ellison talks about the early days of collecting in Michigan), interview by Gene and Linda Kangas

The Regal Pintail(Striking plumage and elaborate courting displays make this duck one to watch) by Dr. Robert I. Smith

The Doctor from Texas (James M. McCleery, collector with a discerning eye), interview by Gene and Linda Kangas

A Wisconsin Find: Enoch Reindahl (Uncovering a new legacy in the collecting world) by Donna Tonelli

Beginner’s Notebook: The Fine Art of Sanding (A new feature addresses the needs of the novice carver)

I Think I’m in Love with my PC (Collectors and carvers alike can put modern technology to work for them) by Charles W. Frank, Jr.

More Small than Big (Bob Guge—his home, his workshop, and his philosophy of carving), interview by Donna Sanders

A Concern for Form (Balancing form and space correctly can transform an average piece into a masterpiece), demonstration by John Mullican

The Accent’s on Painting (Acorn woodpecker demonstration) by Peter Kaune

Joseph B. French’s Decoy Collecting Network (A look at the people who first collected decoys), interview by Jackson Parker

Shooting Your Carving (A step-by-step guide to photographing your latest work) by J.P. Kaufman

Will the Real “Doolittle” Please Stand Up? (Californians defend Ralph Martin in a case of mistaken identity) by Roger W. Barton

The Eyes Have It (Demonstration) by Steve McCoy

Masterwork Gallery: World Class Songbirds (Barth, Hare, Muehlmatt, and Osborne explain the intricacies of their entries in the 1987 World Championship) by Judith Schnell

The Tattle-tale Yellowlegs(A bird normally on the beach that guards its nest from the trees) by Dr. Paul A. Johnsgard

Carving the Competition Feather, Part One (Demonstration) by Jim Sherman

The Woodcock, a Classic Recluse (Incredible close-ups paint an intimate portrait of the elusive woodcock) by Ron Austing

The Many Talents of Charlie Perdew (A true craftsman, the Illinois carver made more than just decoys) by Donna Tonelli

The Bright and Lively Bluebird (A songbird enjoyed by many for its beautiful color) by Dr. T. David Pitts

Study Skins: An Indispensable Tool (An in-depth examination of study skins—where to find them, the legalities involved, and more) by Cathy Hart

The Chesapeake Master (A profile of R. Madison Mitchell with photos of his classic decoys) by Roger Schroeder

“Fresh-Air” Dick: California’s Remarkable Craftsman (A case for why “Fresh-Air” Dick Janson is considered the greatest decoy maker in the West) by Roger W. Barton

The Plain and Fancy Gadwall (A dabbler with feather-patterning second to no other bird’s in subtlety and beauty) by Robert J. Blohm

Crowell Pintail Sets Record at $319,000 (Auction news from the July auctions of Olivier and Bourne) by Jackson Parker

Mallard Mania (Not the largest, prettiest, or fastest, but still the most successful duck on the continent) by Steve Maslowski.

The Wards’ Patterns: An Artistic Legacy (The facts about how and why they were catalogued) by Don Briddell

The Sociable Cedar Waxwing by Peter A. Cross

Mason Decoys: “The Finest Ever Made” (An in-depth study and identification tips) by Dick Clark, M.D.

Head of the Class: Ring-necked Drake (Demonstration) by Jim Sprankle

Only a Whistle Away (Screech owls, red or gray, making beguiling predators) by Dr. Frances Hamerston

Decoy Art Speaks to Julie Hall (She collects the most imaginative, but no repaints, please!) by Bernard Crandell

The Moseleys of Illinois (Douglas, a gentleman carver, and his wife Sarah Louis are documented for the first time) by Donna Tonelli

Details of a Sparrow (a demonstration) by Bob Guge

Textural Diversity: One Key to Success by Patrick Godin

Shadows of the Past (folding decoy silhouettes) by Richard Riemenschneider

Attitudes of the Canada Goose by Paul A. Johnsgard

Birds on Display(public collections of contemporary and antique carvings)

Alan Haid: State of the Art

The Wood Duck: Its Life and Habits by Frank Bellrose

A Piece of Long Island (George Combs, Jr., shares his collection and his history) by Roger Schroeder.

The Silar Tradition (a prolific carver from York County and his legacy) by Harold R. Buckwalter

Expressing the Meadowlark by Ernie Muehlmatt

Woodburning Tools (a comparison of features)

Thoughts on Art and the Ward Brothers by Don Briddell 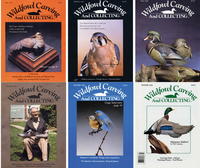 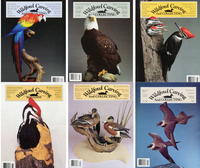 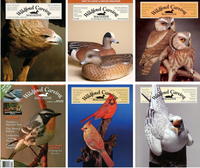 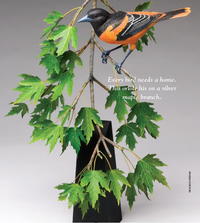 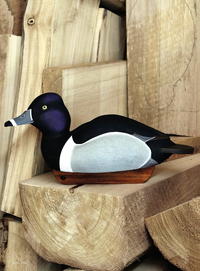