NEW CUMBERLAND, PA—Every year, bird carvers around the world eagerly await the latest edition of Competition. Published annually by Wildfowl Carving magazine, this showcase of the best bird carvings from a number of judged contests displays the incredible work people can do with this unique art form.

Wildfowl Carving magazine began publishing this annual publication with Competition ’88. The latest edition, Competition 2017, will be available at the end of January. It includes beautiful photographs of winners from 12 shows across the United State, Canada, and even Great Britain. It will include the work of more than 150 carvers. The bird carvings range from the incredibly detailed reddish egret that won Gary Eigenberger Best in World at the Ward World Championship in Ocean City, Maryland, to the stripped-down root-head shorebirds that brought Ken Humphries top honors at the Core Sound Decoy Festival in Harkers Island, North Carolina.

In between are more than 200 carvings of everything from ducks to owls, eagles to songbirds. Some are so realistic you might mistake them for real birds. Others take an interpretive look at the avian world. All are incredible.

“I am always bowled over by the work being done by the world’s bird carvers,” said the publication’s editor, Tom Huntington. “These people are artists, and I don’t envy the judges at the shows who have to choose one over another.”
This year, for the first time, Competition features work from overseas with carvings from the British Decoy & Wildfowl Carvers Association Competition and Show, which took place in September. “Canadian shows have been a part of Competition from the beginning,” said Huntington, “but there’s some great work coming out of Britain, too, so we figured it was time to show that off, too.”

In the more than three decades since its first issue, Wildfowl Carving magazine has become the only magazine for bird carving and has published a wealth of informative articles about all aspects of the art form. The magazine and Competition are published quarterly by Ampry Publishing, LLC, of Northbrook, Illinois, with editorial offices in central Pennsylvania.

Competition 2017 will be available to order from the magazine’s website and also from Amazon.com. 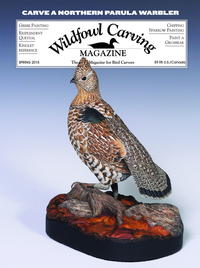 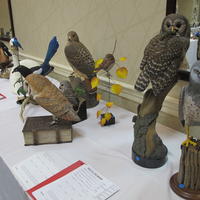 Rest of the Marsh Entries