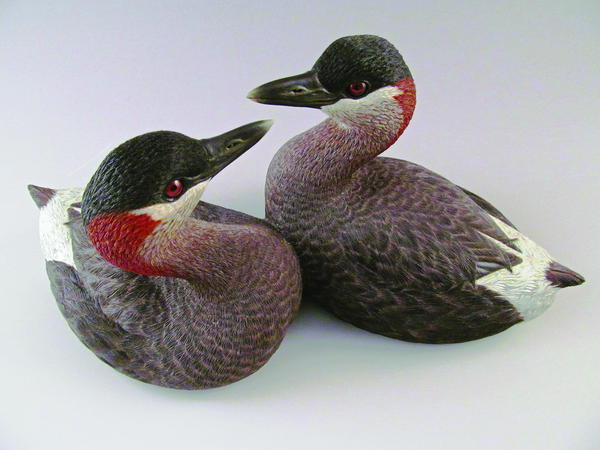 After five months of work from start to finish, my Madagascar grebes were finally on their way to compete at the Ward World Championship in Ocean City, Maryland.

I had no way of knowing how many entries there would be in the Life-size Decorative Floating Waterfowl Pairs division. While grebes are typically not that popular with carvers, the species’ smaller size could attract more entries. Smaller carvings are easier to sell because they usually have a smaller price tag. It turned out that 16 pairs of various grebe species were entered in the 2014 competition.

It was interesting to watch the judging, as I have done in so many years past. The Madagascar grebe is one of the smallest grebe species in the world, and the pairs of great-crested grebes in the tank towered over them. The single-piece design of my carving made things easier for the bird handlers in the tank, because my two grebes never floated apart from each other as the other pairs did.