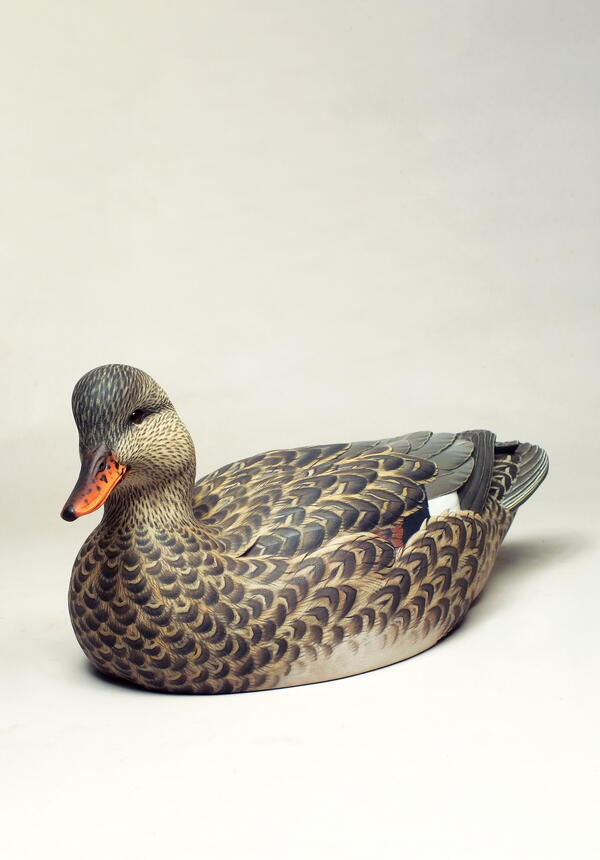 After deciding on the composition of my World Shootin’ Rig entry into the 2013 Ward World Championship, I was eager to begin the construction. The species were a pair of gadwalls with an American wigeon drake. In nature, these two species are often seen together in mixed flocks due in part to a similarity in their diets and range. Rather than make a rig with three gadwalls, I felt that including the wigeon would add color and contrast to make things more interesting.

To model the three birds in the rig, I tried something I had never done before. Initially, for each bird, I made different versions of side profiles in two dimensions, tracing them onto thin cardboard, cutting them out, and painting them black. Putting the silhouettes together helped me visualize the composition. I did not need to see colors or detail; in fact, by eliminating these distractions, the best composition was perhaps easier to develop.

The gadwall drake, also known in Louisiana as the gray duck, for obvious reasons, is a bird of low contrast and a lack of brilliant color. What is so appealing to me are the patterns created by the fairly coarse vermiculation and the crescent-shaped breast markings. From a distance, all this detail projects as a dark gray. For a true gunning decoy, these regions could just be painted gray with no detailed pattern. For the World show, however, I definitely had to create the painted patterns.

On this bird, the transition is very gradual and presents one of the piece’s biggest challenges. If handled with skill and experience the combing technique can result in an amazingly realistic effect. In most other species, when employing a combing technique, I start with a light background and scrub dark paint onto the tops of the three-dimensional pattern. However, with the gadwall, the end result must be quite dark, so the most logical approach was to start with a dark background color and scrub the light onto the combed pattern. I have also hand-painted the vermiculation on other carvings of the gadwall drake using a fine kolinsky sable brush, a much more time-consuming method. On these birds, I used the same approach, brushing the light pattern over a dark background.

The head of the gadwall drake shows a cryptic pattern similar to that of many marsh duck hens. An interesting detail is a subtle violet iridescence in the pattern behind the eye. On such a drab overall color scheme I look for features such as this that I can use to create points of interest. The white wing speculum is another such feature. Forward of that, the wing coverts are a deep, rich red; the arrangement of the side feathers shows off a tiny bit of these feathers.

Gadwall hens are frequently mistaken for mallard hens. Their color schemes are very similar. The mallard hen is an overall richer color with more reddish tones in the feathers, but the general pattern of the dark body feathers with light edges and V-shaped internal markings is almost identical. Of course, the gadwall’s white wing speculum is a distinguishing feature. To highlight this, I composed the side feathers to show off the speculum.

The design includes subtle animation in the head, which is tilted so the bird appears to be looking upward to its left, perhaps toward an avian predator. To make this look accurate, I made sure to tilt the head at the base of the skull location, not at the lower region, where the neck meets the breast.

For the wigeon drake, I created an aggressive scolding posture. I had already made a fully decorative wigeon drake with this design, although it was delicate, with inserted primary flight feathers, thinned tail, lots of feather undercuts, hand-brushed vermiculation, and finely burned and textured feather barb detail. On the rig wigeon, I combed the vermiculation and, besides taking much less time to complete, the final result projects just as well as the hand-brushed vermiculation.

Even though the category requires that the decoys be durable, and so the tails must be thick, I wanted to create an optical illusion to make the tail look thin. The tails of most birds are usually light in value, so when I paint the tail feathers, because the tail must have additional thickness, I paint the excess wood below the light edge of the feathers dark. When viewed from a distance, the light-colored tail is very visible whereas the dark excess wood basically disappears. All three of these birds in this rig are great examples of this illusion. 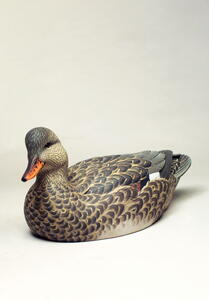 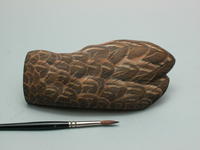 A Side of Side Pockets 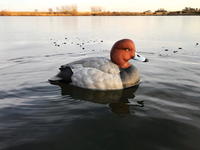 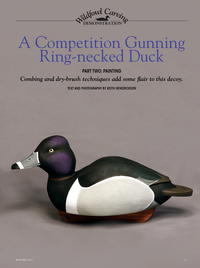