The Rough-Legged Hawk lives where the winters are fierce and the summer days are long. 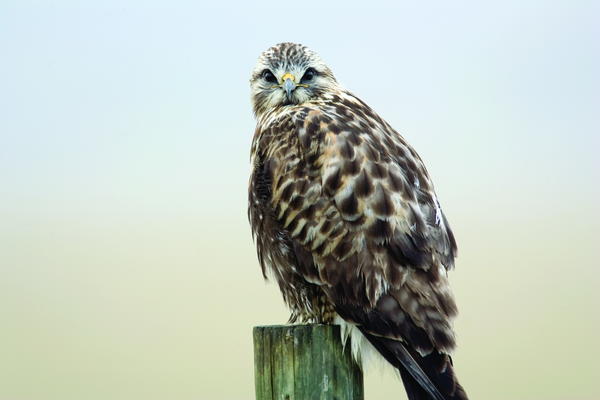 Photography by Dave and Steve Maslowski

North America’s northern states and southern provinces experience winters when temperatures plummet below zero and raging winds pack snow crystals into truck-stopping drifts. Some days have less than six hours of full sun, which is often obscured by overcast skies. It is not a place for the weak or the faint hearted. Surprisingly, though, this winter wild provides a seasonal refuge for the rough-legged hawk (Buteo lagopus), a large Arctic predator that considers these lands to be the balmy south.

These Arctic vacationers (known as rough-legged buzzards in Eurasia) are regular occupiers of power lines, silos, and the tops of tall trees—anyplace that gives them a wide view of their surroundings. In their summer homes, they use cliff faces, hummocks, and large boulders. From these tall perches, they watch for their favorite food, which can be anything foolish enough to scurry within view. That includes lemmings, voles, moles, shrews, longspurs, buntings, shorebirds, game birds, and more.

Daytime hunters, properly known as diurnal raptors, rely on their eyesight to find prey. Some, including the rough-legged hawk, gain a large advantage because they see in ultraviolet light, a wavelength beyond those visible to humans. Urine droplets and scent markings small mammals leave behind show up remarkably well in this light, and apparently the birds can home in on prey by seeing their scent trails.

When a hawk spots its prey, it flies in a straight line to the target site and hovers over it to pinpoint the unsuspecting meal. Several hawk species are capable of momentary hovering, but the rough-legged hawk, like the ferruginous hawk, kestrel, and kites, can hover for extended periods when hunting. Once the hawk feels assured of its target, it drops from the air, yellow feet spread wide for a quick and silent grab. Black, razor sharp talons bite deeply and do not let go.


Read the rest of this article in Wildfowl Carving Magazine’s Fall 2014 issue!