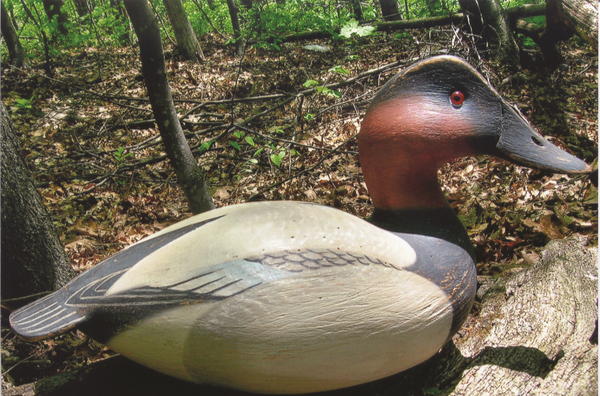 As my carving progressed through the years, I came to know and appreciate the beautiful carvings of Lem and Steve Ward of Crisfield, Maryland. Sometime around 1915 these two brothers began carving decoys together, and their work eventually became prized by both hunters and collectors. Although the Ward brothers are no longer with us, their legacy lives on. I love the Wards’ carving and painting techniques and try to replicate them to the best of my ability. I use photographs of their work as the basis for mine. I also make occasional visits to the Ward Museum of Wildfowl Art in Salisbury, Maryland, where I can see the masterful work of these brothers up close and in person.
There is a power in simplicity which is why I chose to paint a famous Ward decoy, the 1936 canvasback. It is a simple decoy; I will demonstrate my carving and painting techniques so that anyone should be able to make one. I use pine for the body and basswood for the head, and I paint with Grumbacher Pre-Tested oil paints thinned ever so slightly with Liquin medium. Good luck with your own Ward canvasback!

This article was featured in the Wildfowl Carving Magazine Fall 2014 issue.