Home > Demonstrations > Carving the Scrub Jay: A Bird with Character 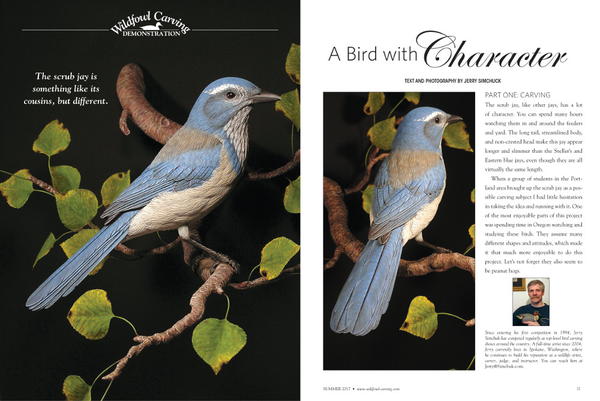 Since entering his first competition in 1994, Jerry Simchuk has competed regularly at top-level bird carving shows around the country. A full-time artist since 2004, Jerry currently lives in Spokane, Washington, where he continues to build his reputation as a wildlife artist, carver, judge, and instructor. You can reach him at Jerry@Simchuk.com.

The scrub jay, like other jays, has a lot of character. You can spend many hours watching them in and around the feeders and yard. The long tail, streamlined body, and non-crested head make this jay appear longer and slimmer than the Steller’s and Eastern blue jays, even though they are all virtually the same length.

When a group of students in the Portland area brought up the scrub jay as a possible carving subject I had little hesitation in taking the idea and running with it. One of the most enjoyable parts of this project was spending time in Oregon watching and studying these birds. They assume many different shapes and attitudes, which made it that much more enjoyable to do this project. Let’s not forget they also seem to be peanut hogs.

I always say you can never have enough reference. I surround my work area with as many photos, magazines, books, and study skins whenever possible. For an Internet-only bonus section of Lynda Goff’s scrub jay reference photos, click here. 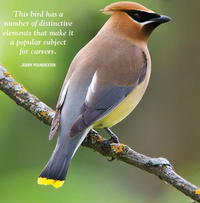 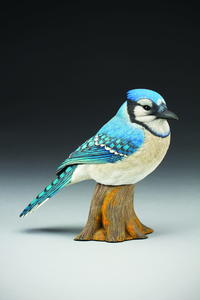