Home > Demonstrations > By Any Other Name - Part I

By Any Other Name - Part I 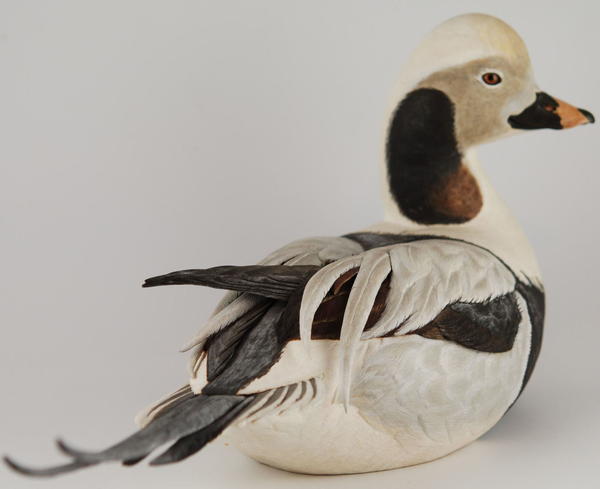 My first oldsquaw won a second in species at the 1987 Ward World Championship.

When I learned that Wildfowl Carving Magazine had never done a full demonstration of a long-tailed duck (formerly known as the oldsquaw), I jumped at the opportunity to visit an old friend. This duck was the first life-size decorative floating decoy I ever carved. It took second in species at the professional level at the Ward World Championship in 1987. When the California Open added its palm frond division, I realized the species, with its long tail, worked well with the general shape of a frond. I chose the oldsquaw for my first palm frond sculpture in 1995. Later that year, I carved an anniversary piece celebrating 10 years of carving for the 1995 North American Wildfowl Carving Championship’s hunting decoy division. For my most recent project, I wanted to do the species justice and design a piece showing a long-tailed drake performing a mating call, as it would look in the high winds on Arctic waters.

When doing my research, I noticed something I had not before: the long-tailed duck has highly devel oped alula groups. The definition of “alula” is “winglet” in Latin, and it is often referred to as a “bastard” wing, as a freely moving first digit, or as the bird’s “thumb.” All birds have alula, and generally use them for flight. However, this species uses its oversized alulae extensively while swimming and diving. You can see the long-tailed duck thrust out its alula just as the bird dives, and the ducks use them continually while foraging for food. This may explain the large size of the alula compared to those of other birds, since this species has developed a specialized use for them. I had not seen this feature on any other decoys or sculptures, so I decided to incorporate it into my design.

This one-piece decorative smoothie became one of my greatest challenges of my career. It required a piece of tupelo 12 inches long, 81⁄2 inches wide, and 91⁄2 inches high. Band sawing this piece was very tricky. I needed to have someone watching from the opposite side to remove pieces as they fell away. The biggest challenge in the band sawing process was cutting the tail’s thin profile through the 81⁄2-inch width of the wood. I had to really slow down and take my time, something that proved true in all aspects of this project. I had to remain constantly aware of the tail as I trained myself to work around it and to work with it.


Read the rest of this article in Wildfowl Carving Magazine's Winter 2016 issue.

For a closer look, please click on images below to enlarge.

What's in a Name?

For years, Clangula hyemalis was known as the oldsquaw, supposedly because its call reminded Native Americans of the sound an old woman would make. In 2000, the American Ornithologists’ Union Committee on Classification and Nomenclature announced that it was changing the species’ name to the long-tailed duck. The word “squaw” had fallen out of favor as being potentially offensive, but the committee denied that was the only reason for the switch. It said, “The Committee declines to consider political correctness alone in changing long-standing English names of birds but is willing in this instance to adopt an alternative name that is in use in much of the world.”

To see how to paint the duck, click here.

Other Works by Laurie J. McNeil

You can follow Laurie J. McNeil and her teachings through her Facebook Page, http://Facebook.com/TheArtistryStudios. Offering private and group instruction, Laurie is available for speaking engagements and demonstration workshops across the USA and abroad. Contact Laurie for more information and to schedule your event, or to order a commission piece, by e-mailing Laurie@TheArtistry.com. 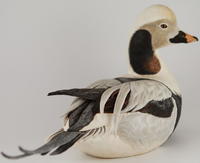 By Any Other Name - Part I

I just finished carving one and used your paint suggestions. I did the tail out of bamboo and built a mold to bend it for a week prior to sealing it and attaching it. Had a hard time deciding on which plumage to choose.