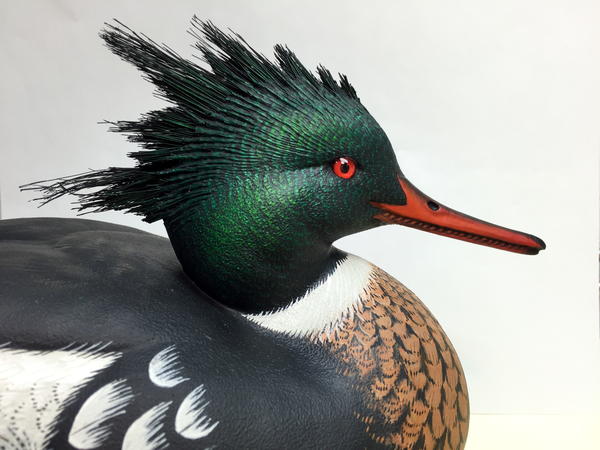 Tom Christie has been carving since he made his first wooden hunting decoys in 1986. Since then he has won awards in carving competitions across the country. He is a eight-time World Champion at the Ward World Carving Championship, and an eight-time IWCA International Wildfowl Carving Association national champion. His website is www.tomchristieart.com.

For some time, I had considered carving a rig of red-breasted mergansers for my World Rig entry at the Ward World Championship in Ocean City, Maryland. The dramatic colors and distinctive characteristics of this species make them immediately recognizable on the water from a distance. I also felt that they would ride well in the often-choppy waters of Assawoman Bay, where the rigs are judged.

The loose and feathery crest of the red-breasted merganser is a challenge to render in carved wood. I have carved several mergansers in the past, and this time I wanted to try my hand at inserting the crest so I could avoid the rigid lines you get when you carve one. I have seen the way many decoy carvers use horse hair or bristle inserts for their merganser decoys, and this became the inspiration for my 2016 rig.

Often when you insert a crest, the line between the soft bristle materials and the carved wooden head makes for a harsh transition. It is difficult to make the blend from bristle to wood in a way that makes the crest appear to be a part of the merganser’s head and not separate from it. I wanted to try a new approach that would soften that transitional area and make the crest appear more natural as it flows out of the head.

In order to soften this transitional area, I developed a process for a three-part crest insert. It is designed to maintain durability while still conveying the softness and flow of the crest of the merganser.

Read the rest of this article in the Summer 2016 issue of WILDFOWL CARVING MAGAZINE.
Subscribe to the magazine 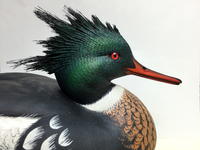