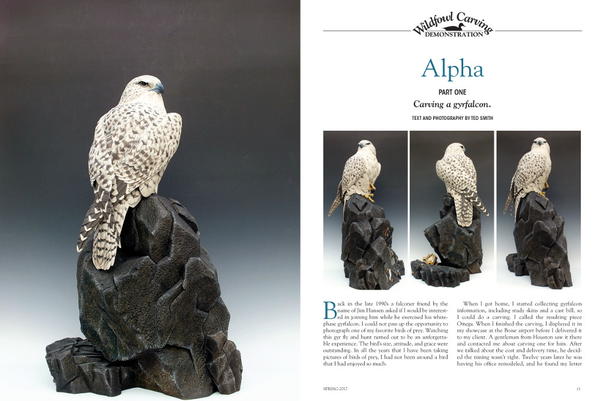 With the help of his wife and a great number of friends, Ted Smith has been a full-time bird carver since 1979. The carving shows that he enjoys most are the Columbia Flyway Wildlife in Vancouver, Washington, and the Ward World Championship in Ocean City, Maryland. Ted lives in Nampa, Idaho. Email him at tjsmithbirdcarver@cableone.net or visit his website at http://deerflatwildfowlartstudio.weebly.com.

Back in the late 1990s a falconer friend by the name of Jim Hansen asked if I would be interested in joining him while he exercised his white phase gyrfalcon. I could not pass up the opportunity to photograph one of my favorite birds of prey. Watching this gyr fly and hunt turned out to be an unforgettable experience. The bird’s size, attitude, and grace were outstanding. In all the years that I have been taking pictures of birds of prey, I had not been around a bird that I had enjoyed so much.

When I got home, I started collecting gyrfalcon information, including study skins and a cast bill, so I could do a carving. I called the resulting piece Omega. When I finished the carving, I displayed it in my showcase at the Boise airport before I delivered it to my client. A gentleman from Houston saw it there and contacted me about carving one for him. After we talked about the cost and delivery time, he decided the timing wasn’t right. Twelve years later he was having his office remodeled, and he found my letter and the photographs of Omega. The timing must have been right, for he called me and placed the order. This was my third gyrfalcon carving, so I had some definite ideas of what I wanted to do this time and also what I wanted to do differently from my earlier pieces. I had a great piece of tupelo that I had purchased from Pete Palumbo, so I was ready to begin.