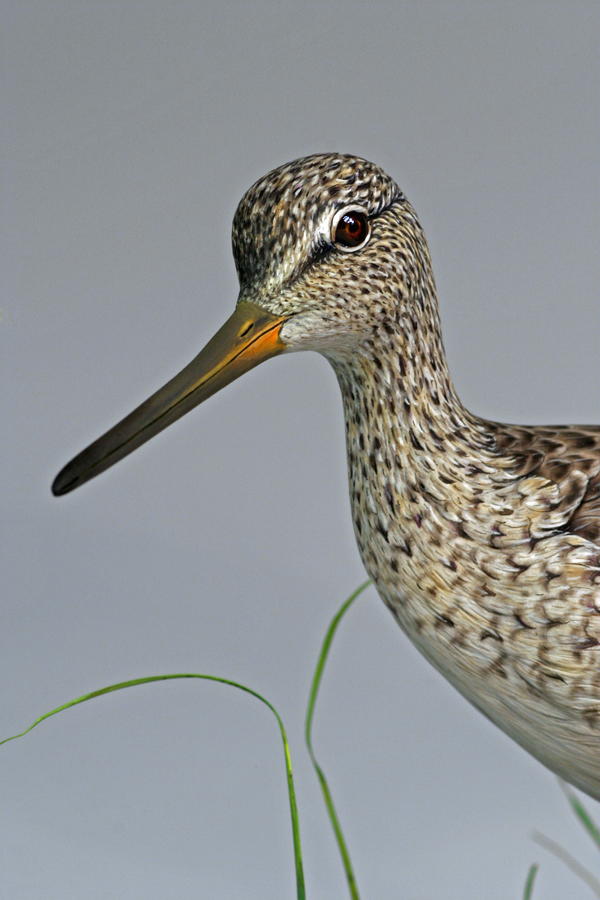 Tommy Stewart’s greater yellowlegs won the North American Shorebird Carving Competition at the 2006 Wings ‘n’ Water Festival in Stone Harbor, New Jersey. He made the grass out of brass and created the duckweed in the mud from the tin tops he got from peanut cans. “Duckweed’s all over the place at the right time of year,” he says. Generally, he does only one or two decorative birds with habitat per year. (Photos by Bill Einsig)

Tommy Stewart spends a lot of time walking the shore of Long Island’s Great South Bay or in the nearby Massapequa Preserve, seeking inspiration from the wildlife he sees. He channels his observations into his carvings, with shorebirds being his specialty. In 2006, 2007, and 2011, Stewart won the North American Shorebird Carving Competition at the Wetlands Institute in Stone Harbor, New Jersey. His winning carvings of a greater yellowlegs, Eastern willet, and buffbreasted sandpiper will be on permanent display there. In 2008 he won the IWCA Shorebird Championship, and in 2010 and 2012 he won best in division at the Ward World Championship with, respectively, a whimbrel and a marbled godwit decorative smoothie.

“He spends enormous time in the field and, as much as possible, he wants to completely immerse himself in the bird and its habitat,” friend and fellow carver Peter Palumbo notes about Stewart. “It’s not about the carving, it’s about the actual bird. . . . As a judge, he brings his field work, artistic background, and unflinching honesty to each and every bird he looks at. He’s smart, and fair.

“I would be remiss if I did not mention his work ethic, which is second to none,” Palumbo adds. Like all of us, he has his distractions, but given a free block of time, he is in his shop drawing carving, painting, or studying, without let up, for hours and days on end. And though his singular purpose is to create, he is quick to stop work and help a fellow carver at the drop of a hat.”

Born in Jamaica, Queens, Stewart moved to Uniondale on Long Island when he was an infant, and then to Massapequa about 25 years ago. There was a nature preserve two blocks away, so it turned out to be a perfect place to study the birds he now loves to carve. “That was just dumb luck,” he says.

He started carving in the early 1980s. “I needed a good hobby,” he says. Both his father and grandfather had worked with wood, so he gravitated toward that. At a carving club, he met Bob Aydelotte, a decoy carver from East Hampton. “He kind of took me under his wing,” Stewart says. He began hunting with Aydelotte and learned how to carve gunning decoys. He says Aydelotte called him “48” because he acted like he wanted to carve 48 hours a day. Stewart still has the first decoy he carved—a green-winged teal that “is in the shape of a shoebox, that’s how square it was.” He also says he grew to love the birds he had started carving, so he decided he couldn’t shoot them anymore.

Another friend in Delaware, Rusty Harvey, got him interested in shorebirds. Harvey wanted to start a shorebird category at a local carving show, so he had mutual friend Peter Palumbo ask Stewart to carve one, just to make sure the new division had some entries. “I was really into the shows and I wanted to do whatever I could in any show to help promote it,” says Stewart, so he agreed, and decided to carve a yellowlegs. It was the start of something big. “I just got hooked on shorebirds,” Stewart says. That was pretty much it for ducks.

When he started carving, he used knives at first, but as he began selling a few decoys, he used the proceeds to purchase some tools and transitioned to mostly power carving. His word of choice is tupelo—“It’s like carving a piece of soap. There’s no grain to it.”— but he finds tupelo a difficult wood to carve with a knife. “Some guys do it, but most guys who do detail work on tupelo use power tools,” he says. “If I do a gunning shorebird, just to put out in the marsh to attract other birds to study them, I might carve it out of cedar and I might use a knife for that. Just to have fun. Sometimes you get too engrossed in the detail and it kind of drives you nuts, so every now and then it’s good to throw on your bench a real working bird and just have fun carving it with a knife.”

Stewart’s real obsession, though, is with painting. “I find that the carving is a lot easier than the painting,” he says. His advice is never to paint the same way twice. Even if he does multiple examples of a species, he tries something new. When he carves another yellowlegs, for example, he first goes out into the field to study that bird again. He says that every time he goes out to observe a bird he learns something new about it. “I might see a different pose; I’ll definitely see a different plumage,” he says. “Those are things I want to pick up.” He says he has a passion for spotting things he hadn’t seen before, like shadow effects, shading, or tone. “So I’m going to pick up different things on that bird that I didn’t have on my previous bird.” He’ll make quick sketches in a journal, jotting down a bird’s posture on whatever catches his eye, and then he’ll do further research at home.

He says that Aydelotte had file cards with the exact paint scheme for whatever duck he was going to do next. “So although I appreciated him and I loved the guy dearly, I wanted to get away from that cookie cutting and do every individual bird differently.”

Stewart works hard to capture the subtleties of what he sees in the wild. He might use eight or nine different color gradations, as he tries to find the tones that blend with the shadows to get the effect he wants. “Sometimes I’ll see a quill really visibly lit up and sometimes I won’t. Those are the times when you have to add more color.” He might put three or four different colors on a single quill, depending on what he’s trying to capture on that particular bird.

Stewart used to burn and texture his birds, but he stopped doing that. “You really have to spend a lot of time and effort getting an end result that’s the same that you could get with a paint brush,” he explains. Look at a carved bird from a few feet away, he says, and you can’t tell if it’s textured or just painted. Furthermore, he’s found that burning can create its own problems. “Sometimes you think the wood is a good piece of wood until you start burning.” Then the heat of the burning pen makes some of the grain rises. “It creates too many problems for me. And I love to paint.”

In his seminars, Stewart talks about the importance of emphasizing the different feather groupings when you paint. “A lot of guys will put the scapular feathers right up to the back of the bird where the tertials are, and you can’t really see details. I go out of my way to drop the wings on most of my birds on purpose, just to show feather groupings. To me, it makes it more interesting this way. It shows the rhythm and the flow of the bird.” In fact, “rhythm and flow” are words that often crop up in conversation with Stewart when he talks about painting. He might point out the way he made the side pocket on a sandpiper sweep up into the wing, or how the round check of a red knot complements the shape of the scapulars. Sometimes he accentuate a bird’s features—making the bill slightly longer, for instance—if it helps create a pleasing flow for the viewer’s eye.

Stewart also carves and paints the eyes on all his birds, because he doesn’t feel that the typical glass eye captures the complex colors you see in the real bird. “I’ll put in a hint of color and shadows that probably aren’t even in the bird, but you might pick them up in reflection out in the wild,” he says. While the eye of the living yellowlegs is brown with a black pupil, Stewart might add a golden ring around the pupil, with some red and green beneath it to capture the sense of reflection from perhaps algae or other vegetation in the wetlands.

For Tommy Stewart, the future holds more shorebird carvings, and more time spent in Long Island’s wildlife preserves to study the real birds. Most likely, some of the carved birds that result will win some competitions, but he says that ribbons don’t matter all that much. “What you learn at the show is what’s really important.” One thing you can count on—each bird that Tommy Stewart carves will be different from the one that came before. “I never do the same thing twice, ever,” he says. “I immerse myself in each new work, always focusing on how I can make it better than the last.” 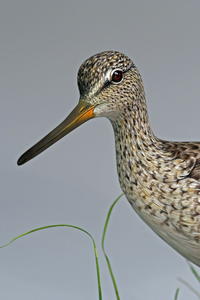 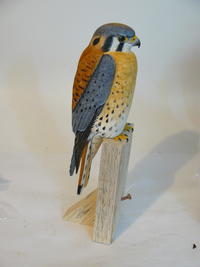 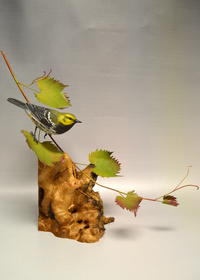 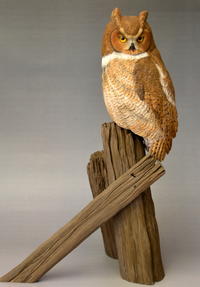 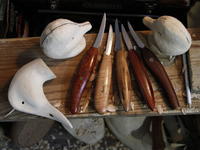